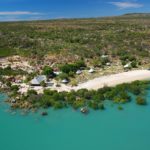 After your helicopter drops you on the beach at Kimberley Coastal Camp, you’re castaway. No itineraries. No worries.

Located on the remote shores of Admiralty Gulf in the far north Kimberley region, your eco-friendly idyll is surrounded by turquoise seas teeming with marine life, and rich bush land bristling with wildlife. And people? Outside of your hosts and fellow guests (12 all told), there’s barely a soul for hundreds of sundrenched kilometres.

Life is different here. Your personal space is one of the six guest gazebos, turned to face the Timor Sea. Your community is ‘The Shed’, a place of gourmet food, stylish comfort and rich company. Your world is all around you – the place where nature holds sway.
Spend your days on a luxury fishing charter on the lookout for the fabled barramundi, explore wilderness trails, look for dugongs and dolphins, or discover the intriguing Wandjina and Bradshaw rock art which has been part of this landscape for thousands of years.
Of course you might choose to take it easy. Picnic on a deserted island. Sip a glass of chilled wine while chef prepares dinner. Swim in the pool as the sun goes down on the Gulf waters.
Welcome to your own patch of paradise.

[It’s] almost as far from anywhere in Australia as you can get. Fishing is a perfect reason – but not the only one – to come here. Mysterious Bradshaw rock art can be seen in sandstone overhangs near the camp. There are also whale watching and bushwalking and the spectacular Mitchell Falls – outstanding even in the Kimberley – is a short chopper flight away. – The Age (Australia)

Kununurra was founded in 1963 to serve the huge Ord River irrigation scheme and generate a food basket in the wilderness. Nearby Lake Argyle is a man-made lake 25 times larger than Sydney Harbour and a spectacular sight. Other nearby attractions include the Argyle Diamond Mine, the source of fabled pink diamonds.
Kununurra serves as the main township to the East Kimberley including the Bungle Bungle Range that makes up Purnululu National Park, renowned for its striking sandstone domes, striped with orange and grey bands.
The Kimberley Region is vast, covering an expanse of nearly 423,000 square kilometres. With an estimated population of just 30,000 it has fewer people per square kilometre than almost any other place on Earth. It’s known for its mighty rivers, huge ranges and lush – almost magical – waterholes.
The region’s western-most gateway is Broome, famous for its stunning coastal location and pearling industry.

Fishing in Admiralty Gulf is magnificent and your hosts will be delighted to show you the secrets of the waters. You’ll have access to huge tidal rivers, mangrove creeks, estuaries, offshore reefs and islands. There are also many deep-water options, offering up Barramundi, Mulloway, Trevally, Mackerel, Tuna, Coral Trout, Cod and Blue Bone. Mud crabs and oysters also inhabit these pristine waters. Operating on a catch and release basis, only those fish destined for the dinner table are retained from the day’s catch.
For those wishing to explore the beautiful and rugged countryside of the Kimberley, a half-hour walk from camp will take you to Mackerel Point; from here you can see the whole of Port Warrender and the nearby islands.
Other walks at Kimberley Coastal Camp will take you inland through wild terrain. Some of the species of birds that frequent the area include Great Billed Heron, Chestnut Rails, Grey Goshawks, Brown Tailed Flycatchers, Little Terns and Sea Eagles. You may also view some of the wildlife in their natural habitat including crocodiles, Rock Wallabies and quolls.
The north Kimberley is home to some of the oldest known rock paintings, including the beautiful Bradshaw paintings dated at over 23,000 years old and representing a culture now lost in time.
Getting to the Camp is half the fun: included in the price is a scenic light aircraft flight to the famous Mitchell Plateau over a mosaic of mangrove lined creeks, breathtaking gorges, rivers and water falls. The final leg of the trip is an exhilarating helicopter transfer to the hideaway.

A large rustic dining table is set with wild and wonderful gourmet fare. It might be saltwater barramundi straight from the ocean, succulent oysters plucked from the rocks, delicious mud crabs taken from the mangrove-lined creeks or a simple pizza garnished with rosemary and drizzled with olive oil. Whatever, the cuisine is guaranteed to inspire.

Scattered amongst the red sandstone and native grasses, spacious guest gazebos offer privacy and comfort. Taking full advantage of the tranquil views over Admiralty Gulf, your room with a view is simple but stylish, featuring king size/twin single beds, flyscreened walls and a ceiling fan.
Open to the gentle sea breezes, the nucleus of Kimberley Coastal Camp is known simply as ‘The Shed’. A large open-sided pavilion hand-built using recycled timber with high raked ceilings, this is the ideal place to discuss the day’s adventures, relax with a book from the library, listen to some great music or just unwind to the sound of waves lapping on the shore.

Kimberley Coastal Camp is open from April to September each year. 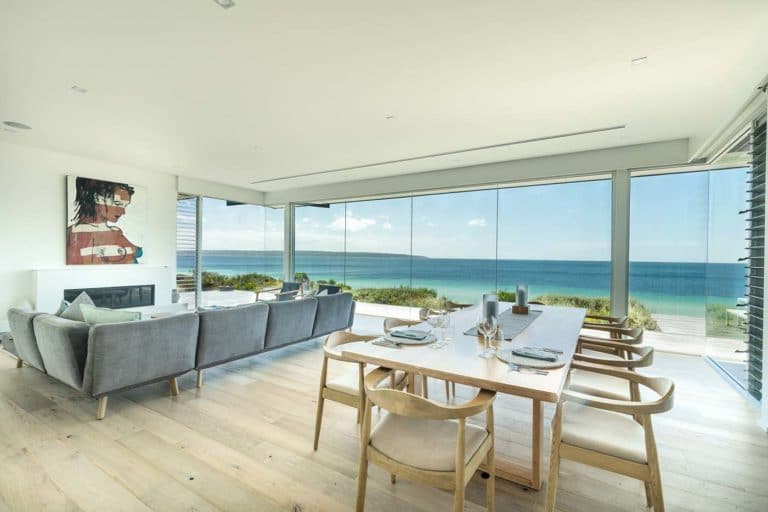