BLOG | With the growing popularity of South Australia’s iconic destinations, such as Kangaroo Island, the Eyre Peninsula and the Flinders Ranges, it’s easy to overlook how much there is to do in Adelaide. The city’s newest attraction, RoofClimb Adelaide Oval, is a great option if you have a couple of spare hours.

Launched in April 2016 this highly-organized and informative tour takes small groups of overall-clad visitors across the roof of the Adelaide Oval, the state’s much loved sporting arena. Dating back to 1871, the oval is regarded as one of the world’s best cricket grounds, but has also hosted many other sports, including Australian Rules and soccer, plus rock concerts – the Rolling Stones played to over 50,000 people here in 2014. The two-hour adventure, which is open to anyone who is reasonably fit and aged 12 years and over, begins with a briefing at RoofClimb headquarters in the Riverbank Stadium.

Climbers then change into bright blue overalls and don elaborate safety harnesses, designed to anchor them to a safety rail which snakes across the oval’s distinctive white roof. Climbers must also remove anything that could drop and injure people below, such as jewellery and watches; secure lockers are provided for your valuables.

RoofClimb Adelaide Oval offers both day-time and twilight climbs, plus a special AFL match day experience to watch local footy heroes Port Adelaide from a platform 50 metres above the playing surface. You need to book ahead for this.
Unless you have a chronic fear of heights, the most challenging thing about RoofClimb is strapping yourself into the elaborate safety harnesses, which look similar to those worn by army paratroopers – and equally cumbersome.

Everyone is then breath tested for alcohol – while RoofClimb uses a network of easy-to-navigate metal walkways, climbers must be vigilant, especially during rainy or windy conditions. The two-hour expedition begins with a short walk past the old ivy-clad Members Stand and then a brief ride via the service lift onto the roof of the Western Stand. Once clamped onto the metal guide rail, climbers follow their team leader onto a narrow walkway that snakes its way across the curving roof. There are fine views across to North Adelaide, the Adelaide Hills and the Park Lands.

While RoofClimb is primarily a celebration of the architectural genius behind the new-look $575 million arena – climbers learn about the special construction methods and materials used to create the Riverbank and Eastern stands – the tour also provides an insight into the history of Adelaide, and the cultural importance of this ground.

The Adelaide Oval is a combination of the old and the new. The new grandstands and the playing surface feature the very latest in modern technology – for example, underground sensors monitor the condition of the grass precisely on computer. At the same time authorities have retained three important parts of the oval’s heritage: the old wooden scoreboard, the Moreton Bay figs and the Northern Mound.

Even people born and raised in South Australia are likely to learn something about the Adelaide Oval as they clamber over its sensuously curved roofs – such as the fact that the Northern Mound was constructed from soil dredged from the Torrens and that the Moreton Bay figs were first planted to block the view of non-paying spectators who once gathered on the slopes of Pennington Gardens, to the north, to watch the cricket for free. From the Western Stand climbers move across to the Riverbank Stand with its unusual honey-combed roof which features a high-tech fabric to reduce weight and ambient heat and several enormous fans supplied by Big Ass Solutions of Kentucky – the two grandstands are linked by a special bridge.

The most exhilarating part of the climb is walking out onto 50-metre high viewing platform which has been cantilevered from the side of the Western Stand. Seating 16 people, this narrow (and fenceless) construction juts out onto the southern end of the playing surface. The platform is already popular with AFL fans who can come up here during Port Adelaide games, but for most climbers it’s the ultimate RoofClimb photo opportunity. Then it’s time to return to ground level. Climbers retrace their steps across the two grandstands, enjoying more views of the city, river and hills beyond. Back at RoofClimb HQ climbers are given a complimentary cap, achievement certificate and group photo. Climbers can also purchase a personal album of images to take home. 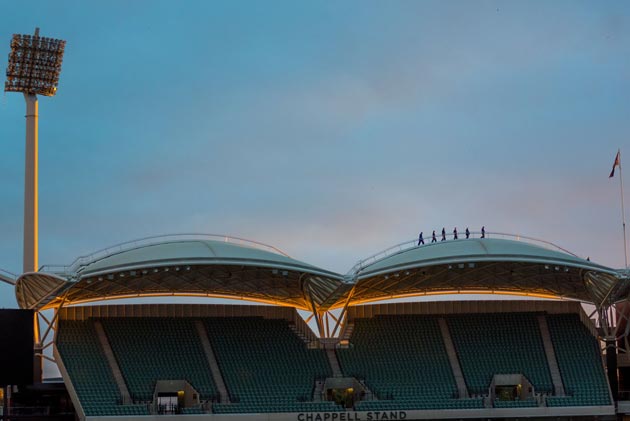 Have you ever gone abseiling with a world-renowned adventurer? BLOG | Perfectly located at the intersection of the indoors and outdoors, glamping holidays in Australia are an immersive way to discover the country’s most breathtaking natural landscapes without compromising comfort. Explore our selection of Australia’s best glamping and luxury tent accommodation, ranging from eco-friendly shelters to rustic bungalows