BLOG | Thanks to our extensive knowledge of Australia, The Tailor has been able to assemble what we modestly believe is the finest line-up of guides in the country

Australia is a destination brimming with amazing landscapes and life-changing adventures, but unlocking the continent’s secrets requires a special type of guide. Thanks to our extensive knowledge of Australia, The Tailor has been able to assemble what we modestly believe is the finest line-up of guides in the country. We work alongside them to create the best possible tours, providing our guests with a level of access not available to other travellers. So whether you dream of meeting native wildlife on Kangaroo Island, exploring the magnificent Daintree rainforest or learning about ancient rock art in the Top End, we turn to these hand-picked local guides.

An expert guide is far more than just the person who drives the vehicle and provides some commentary. All of The Tailor guides are consummate experts in their own right, passionate about Australia’s unique wildlife and indigenous culture and dedicated to going that extra mile to ensure that the journey you choose is exceptional. All of the following private guides provide rare insights, fun encounters and life-long memories. Indeed, for many clients these tours provide the high point of their entire trip to Australia. So for an insider’s view of Australia and its many pristine regions, let us introduce you to an elite group of guides and tour experiences. Former wildlife ranger, Craig Wickham has assembled an expert team of guides who want to show you the best of South Australia’s Kangaroo Island. The motto of Exceptional Kangaroo Island is: ‘Good food, good wine and wildlife in the wild’. Armed with his passion for tourism, conservation management and farming, as well as three years’ experience as a National Parks and Wildlife Service ranger, Craig has designed a range of day touring experiences that cleverly blend understanding, environmental awareness and hospitality.

Of course, with knowledge and experience comes connections and access, so you get to visit natural habitats to see the animals that have made Kangaroo Island famous around the world. In 2015 Craig was named one of the five best travel guides in the world by OutsideGo in the United States. Food is an essential part of every Exceptional Kangaroo Island tour. Depending on the focus of the tour, lunch might be taken in a private bush setting (perhaps a seafood barbecue of King George Whiting and grilled local haloumi cheese) or a picnic served on a clifftop taking in the magnificent views of the Southern Ocean. The Daintree rainforest, north of Port Douglas, is regarded as one of the jewels of Far North Queensland and there is no-one better to take you there than Juan Walker, a Kuku Yalanji man who has been leading tours into the Mossman/Daintree area for the past 15 years. Juan enjoys living, learning and sharing his Aboriginal culture. He believes that through interacting with visitors and teaching them about Aboriginal culture he is contributing to creating an understanding and respect for Aboriginal people. Walkabout Adventures offers a wide range of private tours, including full day cultural experiences which introduce guests to Aboriginal hunting practices, bush tucker and traditional medicine and full day sightseeing experiences which take in a number of significant sights, including the Daintree, Cape Tribulation and Mossman Gorge. Thanks to Juan all of these tours are highly interactive – guests have the chance to sample bush foods, swim in freshwater streams and even have a go at throwing a spear. Guests travel in a comfortable 4WD vehicle. Pick-ups are available from your accommodation in Port Douglas, Mossman or the Daintree. Craig, Janine and Ben Williams, the owners of Pepper Bush Adventures, host a number of award-winning wilderness tours in their home state of Tasmania. Craig (also known as ‘Bushie’) has a passion for Tasmanian wildlife and is also a deft hand at cooking bush tucker, using locally sourced seeds, nuts, fish and other ingredients. Pepper Bush Adventures specialise in day tours or extended itineraries throughout Tasmania, visiting iconic areas such as Cradle Mountain and Freycinet National Parks. As a guest of Pepper Bush, you’ll travel country roads, stand amongst ancient forest and giant trees, climb dolerite mountain peaks, visit award winning vineyards and restaurants and be pleasantly surprised by intimate moments with Tasmania’s wildlife species, such as wombats, wallabies and brush tail possums. One of the most popular tours is the Quoll Patrol, a private expedition held in the afternoon and early evening. The tour includes a campfire dinner followed by an encounter with several species of wildlife, including Eastern Quolls. Australian Coastal Safaris conducts free-spirited safaris bringing together spectacular natural scenery, incredible marine life and the unbeatable Aussie beach lifestyle to be found on the Eyre Peninsula. Led by hosts David ‘Lunch’ Doudle and his wife Mandy, these safaris take the visitor deep into the heart of this beautiful and remote part of South Australia. The couple has a real passion for sharing the secrets of their stunning backyard. You’ll visit Port Lincoln, marine action capital of the southern hemisphere, Coffin Bay National Park with its enchanting cliffs, caves and coves, and amazing Baird Bay where you’ll swim with sea lions and dolphins. Enjoy remarkable wildlife encounters, peerless fishing and the fabulous seafood that makes Eyre Peninsula famous around the world. One particular highlight is fishing on a private beach at Point Drummond. Along the way you’ll stay in local accommodation that offers a mix of waterside chic and castaway character, while Dave and Mandy provide meals that are freshly caught and brilliantly served. The tariff includes all food and beverages, accommodation, the use of an off road vehicle and various activities. These exclusive safaris into Far North Queensland and Cape York are hosted by naturalist Cathy Wharton – one of the region’s most respected private tour guides. Cathy, who grew up on a local cattle station, has been guiding for almost 30 years in this part of Australia. In her 20s Cathy travelled Afghanistan, Iraq, Northern Africa and Europe. These journeys fueled her interest in exploring her own country and learning more about its indigenous culture. Since setting up her own private touring company Cathy has also pursued her interest in the natural world, especially the Daintree rainforest which is considered one of the oldest eco systems on the planet. She is an accredited Wet Tropics World Heritage Tour Guide. “We pride ourselves on being able to share an appreciation of the beauty, history and culture of our unique country with our guests,” she says. “While providing an unrivalled level of customer service.” Some popular highlights include wildlife night spotting, Ziplining, hunting for bush tucker and meeting local Aboriginal elders. Every safari is unique and range from day tour experiences from Port Douglas to multi-day rainforest to Outback safaris. Venture North is a multi-award winning, family owned tour company which specialises in taking guests ‘off the beaten track’ and into some of the more remote and pristine parts on the Northern Territory. Guests travel in luxury top of the line Landcruiser vehicles, escorted by expert guides on journeys through the Top End that are educational, enlightening and most of all good fun!
The company offers a very high standard of service and truly unique experiences encouraging visitors to really experience the country and go beyond just looking by smelling, listening, touching and even tasting things along the way. With a primary focus on nature and Indigenous culture a Venture North expedition can be tailored specifically to your needs – you can opt to camp out under the stars or stay in luxury resorts. Holding a number of special permits Venture North enjoys unparalleled access into many restricted regions of the territory including parts of Arnhem Land, the Cobourg Peninsula and Kakadu National Park. Based in far north Queensland Guurrbi Tours offers small group tours to a number of Aboriginal rock art sites and other places of spiritual significance to indigenous people. The company was founded by Willie Gordon, Nugal-warra Elder and Guugu Yimithirr speaker, who is passionate about his Aboriginal culture and spirituality; much of his knowledge was handed down by his father. As a small boy Willie would accompany him on hunting trips, learning about the land, its bush tucker, bush medicines and stories. Launched in 2003, Guurbi Tours is recognised as one of Australia’s must-do experiences, and his small business has received a host of accolades, including the Gnunkai Best Indigenous Tour Guide Award. Willie takes his guests to six rock art sites, including the Rainbow Serpent Cave and the ancestral Birth Site where his father and grandfather were born. Here he explains the significance of the paintings and the stories behind the art, giving his guests a unique insight into Aboriginal philosophy and spirituality. As you walk the ancient tracks used by the Nugal people for centuries, Willie shares his vast knowledge of local bush tucker and medicines, creatures which forecast the weather, flowers which give messages, leaves which make soap and how to interpret snake tracks. No two tours are ever the same.

*February 2017 – Since writing this post, Willie Gordon owner/operator of Guurrbi Tours has announced his retirement and Guurrbi Tours will no longer be operating. We would like to thank Willie for looking after our guests and sharing his knowledge and culture with us and wish Willie all the best in his retirement. BLOG | With so many outstanding experiences filling up well in advance, discover The Tailor’s selection of five unforgettable New Year’s Eve luxury getaways to enjoy all across Australia to welcome in the New Year. The Top 5 Reasons to Use a Luxury Travel Agent

ARTICLE | In the face of an ever-changing travel landscape, using a quality Travel Agent is more important than ever—especially for luxury travel. In this blog we’ll shine a light on how we make Australian hand-crafted journeys at The Tailor, reveal our behind-the-scenes work, and showcase how you’ll benefit from using our services. 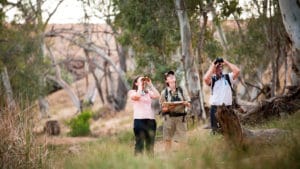